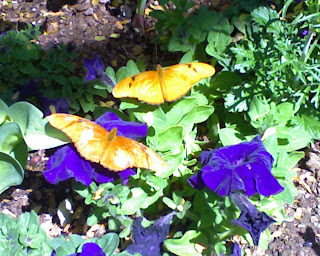 I used to sell upscale toys and games at a packed shop; $100 dollar tricycles, and Brio Trains. One of the activity kits we sold was called the Butterfly Garden.  An Ant Farm; but with butterflies.   You buy the kit and send off a postcard; one spring we tried it.  A few days later, a small brown paper box came in the mail.  It had air holes and a ‘live critters’ warning label.  Inside were four or five caterpillars.  We set up the box with clear plastic windows, and inside placed a fresh branch with green leaves and the caterpillars.  They crawled right onto the branch and started to cocoon.

For three weeks, nothing happened.  Then all at once they began to break out.  The inside of the box was plain white cardboard, all around each cocoon the box was splattered with a thin red fluid.  It looked bloody.  It looked like a minor massacre.  Customers would stop to look in at the new butterflies.  Each time they were shocked, and amazed.  ‘Its so bloody’, they all exclaimed.

When I was 14 an MD told me there was ‘no such thing as growing pains.’  I told him, ‘that he had never been me.’  I have told that anecdote hundreds of times and almost every teen says ‘was he nuts?’ Maybe they are not verifiable, but growing pains are real.  The bones that burn with tension, the muscles that tingle with new life. Growing pains, physical and emotional, are real.  They are real for children and for their parents.  One day you have a child, the next a person you have never met.  Their first birthday is fresh in your mind, and here she stands going on a first date.  Angels announce a blessed birth and the next day your boy is in the Temple, debating with the elders.   It hurts to love like this; to love so much that the tension burns and the stretches tingle. With an average lifespan of less than 40 in late antiquity,  Jesus’ ministry from age 30 to 33 was a retirement career.  In his time the responsibilities of adulthood began soon after the body came of age at 13 or 14.  At twelve Jesus is experimenting with being a self-sufficient adult: why were you looking for me?

We have placed a large box around the time from physical womanhood and manhood until social adulthood.   Sociologists say that the average age for the social markers of adulthood in our culture is twenty-seven.  Thirteen is the halfway mark.  For a multitude of economic and social and reasons we have fully grown men and women with virtually no responsibilities of adulthood.  Our bodies were created to do this: to become adult men and women.   It happens in its own time and rhythm, it is a gift from God and not earn-able.  Adulthood is about social and emotional maturity; Adulthood is taking responsibility for ones own life and the lives of others.  How we manage the creative power of young men and women between physical maturity and social maturity is one of the most troubling and amazing quandaries of our day.

In the liturgy that follows we seek to name that quandary, to name the growing pains for children, parents and the community.  In this Rite 13 we enter into this phase of great love and great anxiety with blessing.  We remember that we are not alone, loving fully formed creatures into fully loving adulthood.  We need this; nearly every culture has a rite of passage around the age of 13.  We need to name the change;  we need to remember that these young people are brimming with creative power.  We need to speak of the love and anxiety that this change brings to the surface.  And we need to pray that all creative power will be used wisely for the common good.

The red fluid wasn’t blood.  Butterflies don’t have red blood.  It was the amniotic fluid of the new birth.  It took a couple of days for butterfly’s wings to stretch, dry and harden; then we were supposed to set the fully formed adults free.  The winds were strong and stiff.  There were airport delays for several days in a row.  We didn’t want to release these new butterflies into a whirlwind.   The winds made us anxious; it just seemed cruel.  We found a branch of freshly bloomed azaleas and even made up a little cup of butterfly sugar water food.  However,we knew we were pushing our luck, and the winds kept on roaring.

Finally we had to set them free, or they would die in that box.  So we took the box to a protected garden at the hospital across the street.  We sat the box down next to a blooming bush, and we opened the lid.  Nothing happened.  The butterflies just sat there.  Then one flew out, and the others followed.  Straight up, and around, and out into the whirlwind.  They were beautifully and wonderfully made by God to do just this.  We watched, and we were amazed.