Listen to the Other: Baptism and Old Turtle 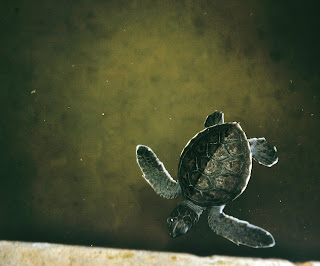 Jesus was lived, loved, died and rose again - Jewish. All we know of his everyday life was embedded in a Mediterranean world that was a wild rumpus of religious and ideological groups. It has been for as long As there have been people and culture. There is a theory that the changes in the depiction of angels in Judaism is evidence of this cross-fertilization. The angels of prophetic and apocalyptic texts Certainly seem to more closely resemble Hindu deities than the humanoid messages that come to Abraham and Sarah. Complex religiosity is as old as trade and empire.

Traveling preachers and activists similar to John the Baptizer and Jesus were a dime a dozen. The gospels make an effort to show us that they - John and Jesus - were not rivals And that John’s ministry wasn’t taped over but intended to be a prelude. They are closely related, cousins in life as Luke states And related in the proclamation of salvation the invitation to live in God’s way.

The gospel of John says that two of Jesus’ disciples were originally followers of John the Baptizer. So it may be interesting for you to learn that followers of John the Baptizer still exist. Mandaeans are a distinct religious group that are ancestrally Jewish, and they believe that John was the Messiah, and that Jesus was well, a fake. Recently decimated by Isis they have survived thousands of years of religious change and political revolutions and persecutions. The very existence of the group makes me ponder religious motivation and steadfastness And what it means to live faithfully in a pluralistic religious reality where your way is sustaining but not dominant. How have you learned to share what motivates you to practice this faith so that it is deep and true and full of purpose and it isn’t just more trivia and noise?

Every somewhat organized religion and I would argue every denomination believe two core things. Something is wrong with the world and this is the way to fix it. We believe that the creation was made in splendor and goodness and that human sin has blasted huge holes in the sculpture. The way to fix it is our returning to union with God and each other in Christ. Said another way salvation for the whole creation is made real by living together within God’s intention, like it or not. And we trust that the way to do this is to attach ourselves to the whole story of Jesus in the waters of baptism and the refreshing of our commitment in bread and wine.

The active promises of Baptism are the instruction manual for this deep practice of belonging to God’s purposes. Continue return proclaim serve strive. It does not pretend that everything in a life of faithfulness will always be all sunshine and palm trees. It does not say we will never disagree or argue or be called to examine our shadows And change our ways. 20th-century martyr, pastor and theologian Dietrich Bonhoeffer says That ‘God’s love for us is shown by lending us God’s ear, and we do God’s work when we listen to strangers, others, people who hold onto a vision of how the world is fixed that is not ours.’

The children's book Old Turtle begins in a time beyond time when all the elements of the earth could speak to each other and understand each other. And unlike our current dislike for discussing politics or religion in polite company, the elements argued about God. They expressed ideas about the ultimate that were very much like their most established selves. The mountain believed God to be firm and unmoving The water said God could take many forms and was always in motion. The snail replied no - God is slow but steady and God’s home is always with him. And so it went - a blistering cacophony of argument.

And then the prophetic preacher divine-ish creature, the Old Turtle says stop. She doesn’t yell or demand or stay in her shell. With a voice like butterfly kisses, she says - Listen. And after a long hard time, the elements learned to listen, learned how to be a ‘we’. The rock learned to hear God’s intention in the movement of the wind, and the snail learned to see God’s will in the speed of the eagle. People who cannot listen to each other may no longer be listening to God either. Our own prerogatives and biases and perspectives: rock hard, snail steady, may have overwhelmed our promises to follow God and love all people.

We live in rapidly changing times with Immense challenges. The baptismal promises of continue return proclaim serve strive Are not idle chatter but promises that intend to redeem the world to save all To return all to harmony with God. As the Old Turtle says - Listen. We are to be a message from God to the earth, and a prayer from the earth back to God. May we hear God’s neverending intention For us to let go of our selfish waring ways and listen for holy voices whispering through the other, whether they be river, rock, goose, squirrel. In the preparations of John in a time of wild change and fragility, may we listen and point and perhaps even let go. In a time of noise of overwhelming cruelty, may we listen to Jesus with our whole heart when he says Come and follow me. May we listen to God’s still small strong voice as he draws us into the eternal we.  Amen.