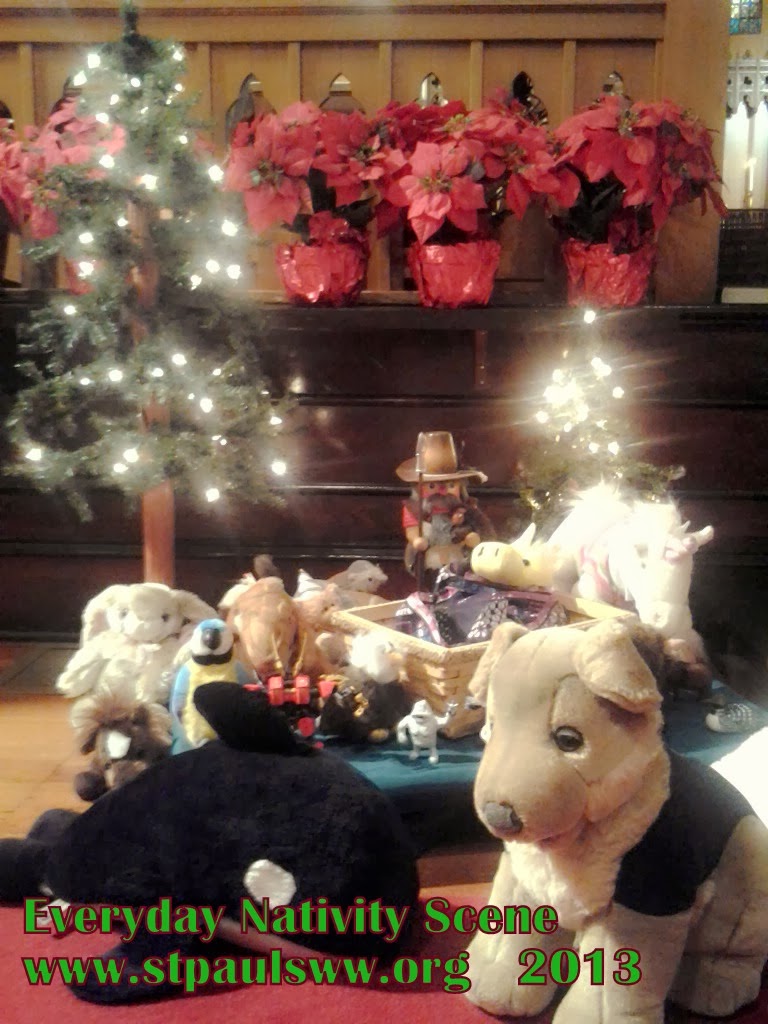 Before there is motion there is imagination.  That is the moment when the ring begins to take shape.  Tradition tells us that there is not a moment when Christ was not with God.  From before the beginning began, the Logos, God's holy Wisdom has always been One with God.  To paraphrase the ancient theologian, there is NO when the Christ was not.

Yet there might have been a moment, when God’s imagination ran wild, when God had a new idea.  An idea so extra-ordinary that maybe, it surprised God.  It could have been a jolt or maybe it was a rising hum.  Did continents split or solar flares erupt?  Maybe this moment was in the second second after the big bang, or maybe it was eons later, much closer to now than then.  What is it like for God to feel such a new idea?

CS Lewis offers that God is nothing but love and he had to create the universe, create us, so that as love he could be love in action.  The idea of becoming one with the creation he loves,  must have felt explosive.  Like a loud clanging cymbal.  I wonder if even God was amazed by the boldness of his love.   Did he utter a nervous chuckle?  Was he both tickled and scared at the same time?  Whenever it was, the  chuckle, the clang,  the notion of Christ being born on earth, that was the moment our beginning began.

When you hear the word childhood, do you imagine a multitude of things cute and cuddly and precious?  Then you were clearly not born and raised in the same era and region as Jesus.  The ancient world into which Jesus was born was not one with Sesame Street or child protective services.  When Jesus was born the children didn’t have much social value, like the toys we used to form our Nativity scene today. (Children and congregants were invited to bring toys and figurines to make a Nativity during the Gospel.) Being born was dangerous, infancy and toddlerhood were tenuous, with only one out of two surviving to age 5.  Children were regarded more like these toys.  At best, something you have invested in, something you have affection for, but something that you know can be easily lost.  Yet it is into this cultural reality That God was born.

God became a tender sleeping infant and a goofy toddler in this nowhere’s ville place; he was given the most common name in the neighborhood: and yet THIS changes everything.  If God is born of a woman, if God can be the child of Mary (which is also an incredibly ordinary name), then any child, born anywhere, could be the incarnate Lord.  Just as how Jesus' death as an innocent victim changes how we see all scapegoats, so to does Jesus’ vulnerable birth change our perception of the  preciousness of the whole creation.

This holy night demands that we hear the grown Savior’s words: how you treat the least of these IS how you treat me.  The writings of the early church make a sudden turn from the cultural norms of not valuing children or anything resembling the concept of childhood.  Children became people.  And maybe, just maybe, we are beginning to show that we know what it means to live as God’s children.

Jesus’s birth, life, death and resurrection should change how we see everything,  ALL material, all moments of despair and lostness.  Jesus’ incarnation calls us to live in a universe that is holy, through and through, everywhere that sound can go.  And a universe that is redeemable, through and through, everywhere that sound goes.  This is the good news: that the least likely and most average material can bear the holy, even you and me. Does it make you feel tickled and scared at the same time?

So where are you in this Nativity story?  Are you an action figure guarding the door?  Or a learned sage still on your way?  How will you make room for God,  now that he has moved into our neighborhood?  Told us his love story with the most ordinary and undervalued things?

There is a moment when you move from imagining a sound to making a sound.  (ring ring)

O' Come to us, Abide with us, our Lord Emmanuel.
Amen. 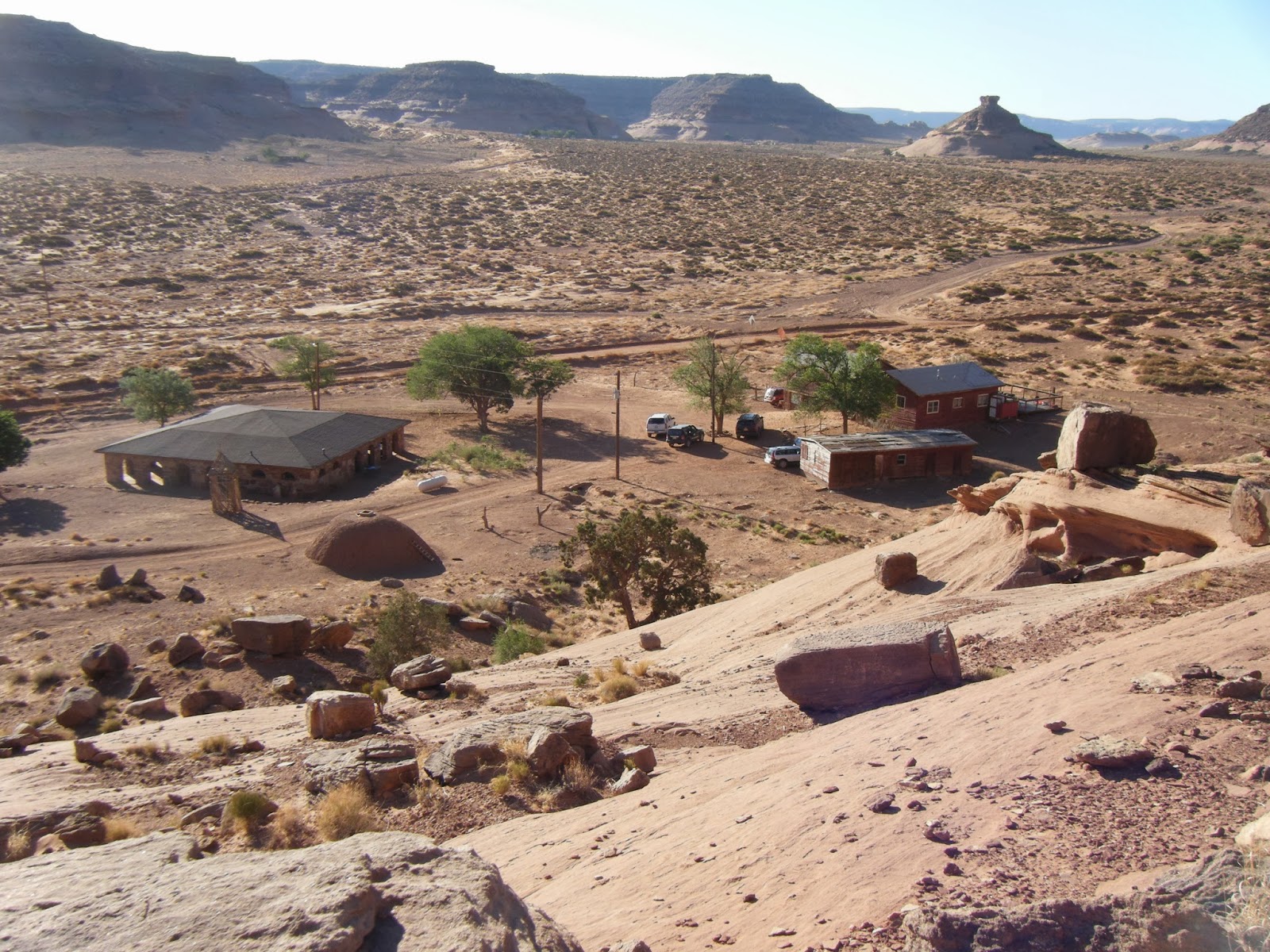 His small rental car was stuck in a deep mound of sand and dirt.  Frustrated and alone on what can only generously be called ‘a road’.  Printed maps do not go there.  Cell service was not found there.  It was a sweltering summer day in the high desert of a country not his own.  I wonder sometimes, what he thought when the dark SUV pulled up beside him.

From today’s prophetic lesson we hear that “A highway will be there. It will be called The Holy Way….Even fools won't get lost on it.”  It can be hard to dig this text out of two and a half millennia of reference and allusion.  The prophetic collection of Isaiah is ours and not ours.  There were the ancient people who suffered through the confusion of exile, and there were human hands that bound these texts together, and holy backs that carried these texts through endless conflict.  The debris is deep, but we should try, we should try not to see OUR maps of this terrain, but the landscape itself…the landscape of Isaiah with all its layers and lives and textures.

Isaiah is an elaborate craft of unity and disunity, voices and visions spanning centuries;  holding steadfast to an imagined future where terror and strife are put to rest, yet still seeing the consistent failure of God’s people to live in his ways.   It is especially important to take an honest view of Isaiah in this 35th chapter, which some scholars believe is like a map for the whole of Isaiah and perhaps the map for the entire Old Testament.  In the texts as we have received them, there is one lens, one experience to tell.  Exile.   Exile and RELEASE.

The holy hands that shape the Hebrew Scriptures are telling many stories at one time.  They are telling a sacred story out the past as a way to describe their reality, and they are crafting an experience wherein people they never dreamed of can find hope and direction.   The prophetic works of the book of Isaiah declare how even in the face of disaster, God will make all things new.  The terror of subjection and expulsion, the confusion of being scattered across the Mediterranean is mixed with the strange paradox that life goes on, sometimes beautifully,   and God is still with us.   The one true God who we may have thought was limited,  This one true God turns out to be unbounded by anything.

You and me and our ancient friends, we work quite hard at being blind and deaf.  Blindness and deafness in the Hebrew scriptures is usually metaphor.  We are being called ignorant and stubborn, but we are being judged ignorant and stubborn…poetically.  The heart of the Old Testament may be the Shema,  yet it also may be this theme: you have a map, but you don't use it, this is why you keep getting lost!  Theologian Stanley Hauerwas puts it something like this:  Life is a journey where God goes before us as guide and example; God accompanies us as our companion and instructor, and it turns out in the end, that he is himself the route.  Yet we, are blind and deaf and think we might know better.  We saw our road turn to dirt and we just kept going anyways.

I have to wonder about that tourist.  He kept driving for miles along a barely drivable road that is not on any published map.   Did he believe that if he just kept driving it would get better?  Sometimes the right way, Is to know when to turn around, to open your eyes and ears to something wholly unexpected.  There he was.  Stuck in the sand.  Was he confident of rescue?  If you were stuck in the sand, on the Navajo reservation, far from home...would you expect rescue?

Isaiah tells us that only the redeemed and ransomed will walk on the Holy Way.   The Hebrew here is from family law.  It refers to releasing someone from slavery.  This rescue is commonly used in Exodus and Exile traditions, which are perhaps best viewed as the same story, told in two ways.  The release, the new life, the flowering is God’s will and action, he draws us into blossom when we believed we were dead seeds buried in the sand.  Exile is Exodus and Exodus is Exile and all of it leads into the way we are told the story of God’s incarnation.

We should see and hear the overwhelming texture of the experience of Exile and return in the Hebrew Scriptures because it is the soil in which Jesus played, It is the library from which the Gospel writers understood and framed their sacred stories.   It is its own landscape which we may need to inhabit to follow him.  We live in God’s story, but he does not travel by our roads.   God chooses to become fully human, to be born of a vulnerable young woman, in a war-torn corner of a brutal empire.  This is our unexpected rescue.  The child of Mary.  The willingness of this young woman to say yes and be the God Bearer.  Gloria, Mary, Rose.  Our rescue isn't elaborate, it is dirt strewn and it is unexpected.

I had spent several summers on the Navajo reservation, and each previous year I had wondered how necessary our large rental SUV’s were.  Experienced hands assured me they were necessary, and that summer I found out why.  In the Oljeto valley of the Navajo nation there are few paved roads.   There in far SE Utah many of the roads I know by heart, are not what most of you would consider roads.  But that summer, even the usually passable 'main drag' was awash with thick drifts of sand  (An experience rather like driving in snow and ice).  After a long week of Vacation Bible School we were almost done with our journey, and I decided that I could risk trying the shortcut.

A shortcut path that  I suspected to be more arroyo than road, and which I knew to sometimes be troublesome in other years.  We were going along fine, but then, there he was.  We pulled up beside the isolated German tourist He was standing ankle deep in sand beside his tiny white car.   And we asked if he would like some help.  I wonder if the young Caucasian woman (myself) in the driver’s seat was a surprise.  I wonder about the unusualness of the people that came pouring out of the SUV.  6 or 7 people, mostly female, and several teenagers.  Did he wonder if we could be any help at all?

We went back to the church (which was not very far) and found shovels and boards.  But it wasn’t enough.  The good news is that we knew the neighborhood,  we knew who to ask for help.    Have you ever been stuck in the sand…for real or metaphorically?  What drew you out, what set you on a safer path?  Maybe it was a new map, maybe it was a shovel.  Maybe it was unexpected.  Or maybe, it was a daring young woman, who chose to help.  Her soul proclaims the greatness of the Lord, For he has looked with favor on his lowly servant.  Thanks be to God.   Amen.