Communion with Nick and Lucy 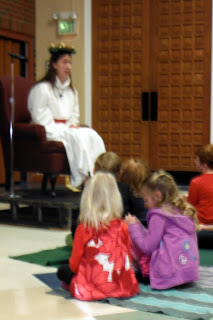 Traditions have to start somewhere.  A tradition is a habit that you cannot remember living without.  It may have begun last year, but now, it is a tradition.  You won’t find a Celebration of Nick and Lucy anywhere else. Traditions have to start somewhere! Today we celebrate and welcome Nicholas of Myra and Lucia of Syracuse: Nick and Lucy.  (For readers who were not in attendance: we had our guest ‘celebrities’ in the liturgy.  Nick in miter (even though that is inaccurate, historically) and Lucy in a crown of electric candles.  Thanks to Shannon and Stephen for their willingness to play along!) Nick and Lucy lived in the 3rd and 4th centuries, both along the shores of the Mediterranean Sea. He in modern day Turkey and she on the island you and I know as Sicily. As far as we know they never met; at least not on this side of eternal rest. Nick and Lucy sounds like the title of a children’s book. Two unlikely friends and their holy adventures in late antiquity!  Rescue sailors, aid the poor! Defy common sense by wearing lit candles on top of your head!

A Celebration of Nick and Lucy is my own innovation, no wait, tradition. And I must admit that it began in the middle of one of my ‘bah humbug’ phases. Not a ‘bah humbug’ out of Scrooge like coldness, or because of personal loss.  No, it was a bout of that December fundamentalism that strikes some of us from time to time.  Where I want to divide and conquer, where I am so appalled by some of the habits of the modern holiday season, that I that I want to take the season back. As if a season was the claim of any particular group.  Truth is that winter solstice celebrations are nearly universal across cultures and time. It is cold and dark.  Let’s get together and have a party; ‘because if you really hold me tight, all the way home I will be warm.’

So it was for our ancestors in faith who saw the parallels between the Good News and the passage of this island home around the sun. They started a tradition, they bonded the anticipation of the birth of Christ to the winter solstice. It is striking, and pragmatic.  In my ‘bah humbug’ moments I have to be reminded that divide and conquer is not the example to borrow.  We have two gifts in these overlapping festivals.  First an opportunity to proclaim Good News while hearts are warm to the radical notion of God born in human flesh, in poverty, to a young mother under the thumb of empire.  Second, is a chance to face unafraid the injustice we have made.  Advent is a bumper sticker that says ‘Jesus is coming.  Be Busy.’  The Lord is approaching, and we are supposed to be listening for God’s way to make a new path before it is too late.

So a few years ago I introduced Nick and Lucy, made them friends. I invited them to dinner, filled it with music and frivolity and all the winter wonderland the Advent police will allow.  We invite friends and strangers into a memory. We offer all ages an encounter with two saints in linen, two saints who were ordinary people, who heard Jesus say to heal the sick, and feed the hungry, and they did it.  With Nick and Lucy we re-member the life, death and resurrection of God-with-us, we re-imagine it through hospitality and table fellowship in a community of believers. It is a communion of saints in thought, word and deed.
The historical record for Lucia is thin, and rather contradictory. The historical record for Nicholas is much thicker, he was after all, a bishop.  However, his legend is also contradictory, and if you include the latter day appearances attributed to him, well his story is rather mystifying.  By the way, our guests transported via Tardis time machine know nothing beyond their 4th century lives, and much less do they know of any rumors of Nordic immigrations.

Why do I, and therefore we, offer this fresh tradition of Nick and Lucy? Why bring together two esteemed saints who each have their own days of remembrance? To begin they share so much, both Nicholas and Lucy are remembered for going above and beyond the call of Christian duty.  I will admit that it offers a wonderful gender and ministry balance: male and female, lay and ordained.  However, here is the best reason why.  It is because Lucy’s simple story shines light on the life and ministry of Nicholas.  Her story gives back to him his flesh, his heart, his bones.  She gives to Nick his true self, his ordinary, Christ-like humility.  He was after all a servant who did prepare in the desert a highway for the reign of God.

And it is his grand presence - both earned and embellished – Nick’s larger than life persona can raise Lucy up, bring her witness into our sights, it can raise the volume of her gentle service with sleigh bells in the snow.  Bringing them together, and bringing them here, we remind all ages that the communion of saints isn’t a once a year remembrance.  The communion of saint’s means that Lucia and Nicholas and hundreds and thousands more walk with us when we seek to do Jesus’ will.
I am not going to tell you their story, Nick and Lucy are here from out of time to do that themselves at the celebration that follows.  What I will tell you is that they are gospel in a nutshell, they are the good news made plain in life and blood.  Our friends Nick and Lucy are embodiments of what the author of the gospel of Luke does so well: to proclaim the good news of Jesus Christ in word and action; and to do so clearly and simply, again and again. Salvation, alignment with peace and justice and the blessing of the creator of the universe: this gift is for all.  It is made real by following Christ out into the world.  Our Lucan gospel today assumes that you know that this is what is meant by paths made straight and lofty hills made low. Chapter by chapter Luke shows us again and again what the good news is and our role in it.  Because what if this was the only chapter you heard?  What if the only gospel you ever encountered was in the life of Christ’s followers?

We are ordinary men and women.  Most of us, like our friends Nick and Lucy, are blessed with a multitude of privileges.  And like Nick and Lucy we are ordinary people who are drawn into Christ’s presence, who have chosen to follow him for reasons we may not be able to name.  I invite you to find yourself in their story, fill in the gaps with your own passions, fill your heart with their courage, believe that your faithfulness to Christ need not restrained by anything, not even gravity or common sense. Be Nick.  Be Lucy.  Go out into the world and make the rough places smooth and the crooked roads straight.  I offer you a simple phrase, for all from 1 to 102.  It has been said many times, and in many ways. Be Lucy.  Be Nick.  Let the tradition begin with you.

To learn more about my Celebration of Nick and Lucy send me a note!

Posted by Jane Alice at 8:05 PM No comments: