Broken Bread and Temple: Austen, Solomon, and Turning Back To God

“My idea of good company ...is the company of clever, well-informed people, who have a great deal of conversation;  that is what I call good company.'  So said the sensible Anne Elliott to her haughty cousin Mr. Elliott in one of the most quoted sections of the novel Persuasion by Jane Austen.

I do not know if  I would find Solomon to be good company, even though his common reputation is quite polished.   I do not know if he was actually clever, wise or well informed, I do know that he seems to have had the best public relations experts in history.  Whoever he was, whatever he was really like, open any children’s Bible and you will likely learn that Solomon was clever and well informed, writing an array of proverbs.  In the ancient world the biggest and best nations, such as Greece and Egypt, had considerable learning, knowledge and wisdom traditions.  A nation of any regard needed to measure up.  Perhaps he was a poet of endless brilliance, yet nothing in his biography would suggest a reason to be trained in such arts.

You may have heard that Solomon raised the reputation of early Ancient Israel through treaties and building projects, like the Temple.  (Young people of the congregation were concurrently marking off the dimensions of the temple (10mx30m) inside the nave.  Which happens to be almost the exact same dimensions.  Hmm.)  This Temple our friends are helping to outline, this was only a small fraction of the massive building projects.  This Temple is a side building for the palace, only about 20% of the total palace complex.  All these projects were built through a gigantic tax burden and forced labor.  Two factors that increase social stratification and angst.

You may have also heard that Solomon was good company, he was a romantic, having a multitude of spouses.  These women, these princesses were traded as collateral in treaties.  Women whose very lives were considered currency.  They came to the palace and they installed the idols of their homeland right in the Temple of the one true God.    If by some impossible occurrence I were to meet Solomon, maybe I would enjoy the splendor of his palace, or even his jokes, maybe I might detest his policies but find him warm and generous.  We shall never know, because our only real source of information about Solomon is scripture.  A text of multiple voices across time, a mix tape framed by a final editor who does want us to regard the reputation of Solomon, and at the same time be very clear about his betrayal of the allegiance with God.  His reign is offered as a lesson in opulent selfishness and social brokenness that ends in the harsh destruction of Exile.

Our reading today is in the middle of this regal ceremony, imagine something like the hero’s celebration at the end of Star Wars. Pomp and royal psalms and promises loudly recited.  Except in this scene, the outline of the how the Empire will betray its commitments to God are put right on Solomon’s lips.   ‘If only your children look to their way, to walk before me...’ . If you care for the well-being of the whole people of God, if you teach your children’s children, If you tend the poor, the immigrant and the widow; then this precious Temple and dynasty will live on.  If you read the whole chapter,   it is a really quite clever, reading like precise foreshadowing.  This chapter is a series of promises that turn out to be confessions.  You know this by the petition that God hear and forgive.  Solomon and all those worldly passions he is so known for, these flung open the doors to devastation and decay, these turns away from the Lord God of the Universe, and it is the judgment of the prophets that these sins will tear the Temple down.

The Temple, for all its grand place in the imagination of our hearts, was really not much bigger than 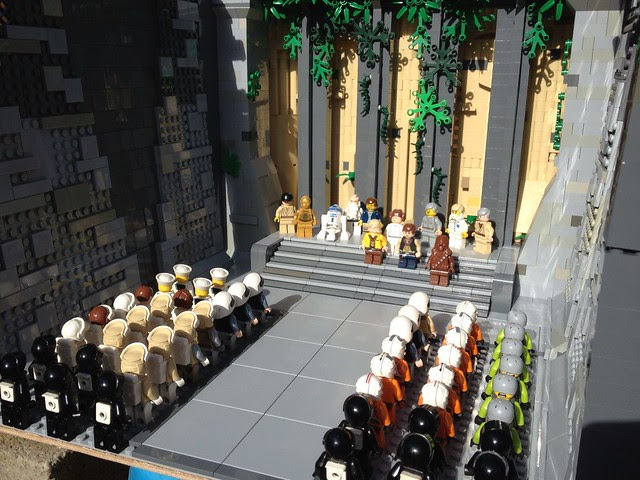 our sanctuary.  This is a surprise to some of us.  And the other surprise may be that God isn’t contained there. Never was.  The Ark that rests in the middle, the wings that are the footstool of God; there is nothing above them.  A clear sign that while the Ark and the Temple may point to God’s presence, they are not the presence itself.  Did you notice that it said God’s name is in the Temple?  God’s name is a vibrant living sign of God, but it is not God.  Did you see that God’s vision is turned toward the Temple, did you catch that God’s hearing is tuned toward the Temple?  This is not a place of magic presence but dynamic attentiveness. God’s attention is turned toward the Temple, and our devotion is drawn toward this same holy love.

It is a place of communication between human and God, a meeting place of heaven and earth.  The Temple is supposed to be a meeting place, a good conversation, true and challenging, a dialog that can bring renewed faithful practices.  A destroyed Temple and an Empty Tomb   do not signify the absence of God.  Instead they are signs that point to God’s presence leading us on the road ahead.  These signs show us that God is ahead of us with our friends who contain fires, God is on the front lines healing in destruction, and God is drawing us out of our shame to care for the lost, the lonely and the stranger.  Jesus says, "Destroy this temple and in three days I'll raise it up."  Then he tells us that the temple he was talking about was his body, and then in today’s lesson uses a provocative material sign to demand that we turn toward him and seek union with his body, this is all coming back around to the practices of allegiance with God’s reign.  The temple has been trampled, broken and transformed into a living presence.  The meeting place, the words of conversation between heaven and earth have been made flesh in Jesus.

He has compassionately called us to turn to God, to seek forgiveness, to rise from any devastation and live with him.   When Jesus surrenders the promises of God into the passive forms of bread and wine, he forgives all of our turning away from God.   Bread and wine become reconciliation and attentiveness, a meeting place of heaven and earth.  It is a meal that forgives people like Solomon and like you and like me.  This bread of life transforms us from selfish betrayers into beloved guests.  Solomon’s reign turns out to not have been the success story you may have been led to believe. It was a foolhardy tragedy with devastating results.  Yet he is much like us, selfish, stumbling, believing and easily distracted by worldly passions.  He is an faltering believer, whose offenses are both judged, and forgiven, in the breaking of the bread.

The measure of our courage is the measure of our willingness to embrace disappointment, to turn towards it rather than away, the understanding that every real conversation of life involves having our hearts broken somewhere along the way and that there is no sincere path we can follow where we will not be fully and immeasurably let down and brought to earth, and where what initially looks like a betrayal, eventually puts real ground under our feet.
–David Whyte, Consolations

“I can listen no longer in silence. I must speak to you by such means as are within my reach. You pierce my soul. I am half agony, half hope. Tell me not that I am too late, that such precious feelings are gone forever. I offer myself to you again with a heart even more your own than when you almost broke it, eight years and a half ago. Dare not say that man forgets sooner than woman, that his love has an earlier death. I have loved none but you. Unjust I may have been, weak and resentful I have been, but never inconstant. You alone have brought me to Bath. For you alone, I think and plan.”
–Jane Austen, Persuasion