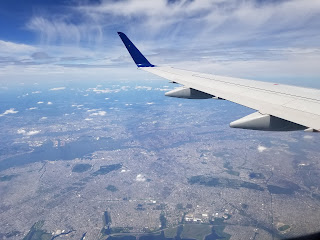 It was a morning flight, not too early but maybe early enough that I should have had some coffee before negotiating the security checkpoint. Eventually, I got some coffee, went to my gate. Everybody got on the plane We all sat down buckled our seatbelts, and pretended to listen to the safety instructions. As the plane takes off there is a boy in the back row, and what he says something so loudly that I'd be surprised if the pilot didn't hear him. What he shouted was: Whoa! We are flying! This is the best ride ever!

I don't know about you but I've been flying my whole life I would tell you that airplane travel has ceased to amaze me but I am not sure if it ever did. It has been a fact of life. We have these huge metal contraptions thousands of pounds of steel and plastic and humans and by harnessing the power of science and technology it soars through the skies and moves hundreds of people at a time from Philadelphia to something as far away as London in 7 hours. Before the 20th century, everyone would have wondered what crazy wizardry is this?? But it is now 2020, and I just sit there in this awesome invention and sip my coffee.

The easiest definition of Epiphany and the season after the Epiphany Is the expression: whoa.. Whoa - meaning what that boy on that plane meant energetic, excitement, a good kind of explosiveness. But our season also means the other kind of whoa - the ‘whoa - wait a second’, brought up short kind of whoa. The Epiphan-al season starts with these Magi Looking for Jesus. Often the tradition refers to them as kings they're most likely not kings. That connection starts showing up in the 4th century and it seems to be connected to a our psalm we shared today and a verse of Isaiah, where the rightly royal gifts of frankincense and myrrh are mentioned being brought to a King of Judea. The Magi don’t have names, and they're also not really Wise Guys. That idea picks up steam in the nineteenth century, an era of industrialization, one that celebrated bookish knowledge and where weird phenomena we can't explain is swept under the rug or denied. So this wise guy nick name, it smooths things over: ‘Oh you know they were men of science who found Jesus, no angelic stuff, no stars going the wrong way, no funny business.’

The word Magi is probably best translated these days as wizard. Because the courses available at the fictional Hogwarts School of Witchcraft and Wizardry would be quite appropriate to the ancient Magi: astrology, potions, divination. If I was an average woman of Judea in Jesus’s era, I may be a Muggle, but I believe that magic exists and trust that wizards etc are real. Yet, this whole thing, the weird entourage of wizards/magi that comes to find this odd little family of Mary and Joseph and Jesus - it doesn’t seem kosher, I will probably keep my distance. The magi are just as other as the shepherds.

This entire episode is full of mystery and strangeness, and it doesn't match up well with the Lukan version, and it doesn't always mesh well with other historical records. There are a pile of things that invite a mountain of unsureness. Are the Magi connected to the places where gold and frankincense and myrrh are harvested - Africa? Some experts assert the Magi are Zoroastrian - which is still an active religion rooted in modern Iraq and Iran. Other experts say they're definitely diaspora Jewish gnostics. We won’t know because the text doesn’t seem to think this matters. How many Magi - it doesn’t say that either. We tend to fixate on several of the things that the text isn’t concerned about, and perhaps that should give us pause.

I took out a ruler and I measured the birth story in Matthew and this one. The Magi episode is 11 inches of text whereas the baby Jesus episode is only 4 inches (NRSV Oxford Study Bible). In an era when writing materials were precious - this imbalance matters. So if we ignore the accessories we obsess about, hat do we find? Whoa. A frightening and strange moment where the life of Jesus is seriously threatened. Part of what we're supposed to hear in the episode is an echo of the Passion. Secular power gaming with community leaders, evil using hypocrisy and slaughter hold its ground. Our Saviors very life depended on the mercy of strange Magi, who made a long journey, where they found something unexpected, and then daringly defied a dangerous despot, and fled by the risk of a strange route home. The wonderful thing about the inexactness and layers of accessory details Is that they are wonderful tools to help us enter the story. If wise guys with names at the cave helps you connect with the text - then imagine it that way. We learn the sacred kinds of learning through playfulness.  However, when we find ourselves finally in the story, the most prominent question is a hard one: will we go toward Jesus or back to Herod?

For people like us who are encouraged our whole lives to celebrate the technical and the safe and the consumable - of course we focus on the technical and consumable parts. We are also encouraged our whole lives to stifle and distract ourselves from anything that isn't useful or measurable or upstanding - so of course we call them sages or kings rather than magi or wizards. The good news here today is that there is so much we cannot conceive of and even in a reality of so many pitfalls and cruelty, God’s grace and mercy is everpresent, and works through strangers and untrusted sources.

We are not stuck in the spokes of Herod’s manipulations, nor are we alone in a cold clock-like universe. There is more in God’s creation than we will ever imagine, and there is a community of wonderers and seekers and believers that surround Jesus and keep him safe. This same wondrous presence of the Holy Trinity surrounds us too. This Epiphanal season lets have some whoa - excited love and open-eyed questioning. May we never cease to utter whoa whoa whoa in the embrace of the love and mystery and wisdom of God that surrounds us always. And may we know that if we find ourselves in any type of Herod’s web, we can be like the wizards/magi and go home by another way.