I bought the shirt.  It was dark blue.

My freshman orientation was over twenty years ago.  I had not met then the women who would remain my friends all these years later.  I do not recall the tables I visited, but I did walk away with at least one blue shirt. From the Episcopal campus ministry table.  On the back it had an imitation wood carving of a devil.  It said 'if all you want out of religion is hellfire and brimstone, burn this shirt.' 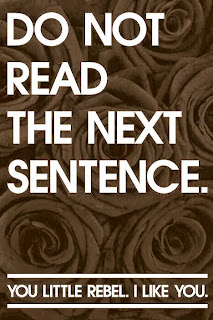 At the time I might have told you I was Episcopalian, despite not having attended a liturgy in years, but I would never have claimed to be Christian.  Not after three years in south Texas and three days in the mid-south.  My participation was three semesters in the future then, and this vocation would have been an absurd suggestion.  Yet I bought the shirt.  My mom borrowed it at some point, and I don't recall that it was returned.  Later I learned that it was a borrowed advertisement, but it was a good one.  Provocative and thoughtful, funny and outrageous.  In case you think this was an out of the ordinary rebel offering, I will let you know that both priests at that parish at the time, are now both bishops (in neighboring dioceses no less).

All these years later, I am the person at the table.  No shirts, instead some silly and provocative flyers and home baked cookies.  It was hard not to feel a bit like was in a scene from 'Blue Like Jazz'.  A campus of a similar ilk, liberal arts known for its outdoor education and agnostics.  I heard a lot of 'I am not religious' responses to my inquiry of, 'would you like a homemade cookie?'  I also heard about how pretty our church is.  I met some very nice people, including our table neighbors: classics society (Go Homer!) and the 'trap shooting club' (eavesdropping let me know I was not the only person who didn't know what that is).  It seemed like we were the only church there.  We did manage to give away all the cookies and most of the flyers, running out of the Bilbo meme and the Noah/Ikea cartoon.  I went as much to meet students as to watch part of my new neighborhood at work.

It was a very good day that makes me recall that blue shirt, and it makes me wonder.  What starts the journey? For my friends who met online, was it when they filled out a profile, or when a match appeared that didn't make one run way screaming?  In my telling that blue shirt was a strange foreshadowing of the lifetime to come.  I know it reminded me that even though I rejected all sorts of varieties of the Christian religion, there was a place, that was beautifully unusual and a good match for my tastes and priorities.  It was an open door that I wouldn't try for a while, but remembered when I needed to.

I was a bit disappointed that the shooting group had more names and emails than we did (my hippie is showing).  Because an explosive power and an almost empty table seem to catch folks attention.  Which also makes me wonder.  (What does non-violent explosiveness look like?) Still, I am glad for the conversations and connections I made.  Not because it might put bums in pews but because God willing we put a gospel face on our pretty and classic church.

Recently an office of the church center put out a series of ad's that I found to be snide, feeble and hardly gospel.  They seemed to me to be more like a 'dead end' sign than a friendly emoticon.    How do we become more like a plate of warm cookies and less like a green jello salad?  How do we do this loudly without seeming self aggrandizing?  Is there such a part of our life together that could be as attractive as gunpowder and a balm in Gilead?

What began your journey into something brave and worthy?
Posted by Jane Alice at 9:13 AM