Echoes of Whoa! Singalong Make Your Own Epiphany Pageant 2016 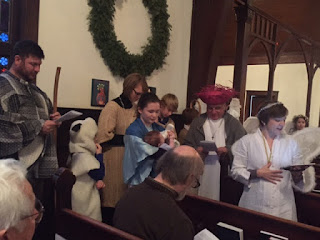 We look up on a cloudless night and we see the twinkling of glitter strewn across a deep blue firmament.  We do not see the skies as the ancients saw them.  The ancients they saw something different.  A ceiling that is dark but with paintbrush strokes of tiny glimmering and moving lights.

When you look up at night, do you imagine the ages and ages of time that are pouring down on us? Do you wonder where it is all going?
It came upon the midnight clear, that glorious song of old, from angels bending near the earth to touch their harps of gold;

Before the beginning began, Christ was with God, he is God.  In him is light and life and the darkness cannot extinguish the bold brilliance of this light.
God is Love; let heaven adore him; God is Love, let earth rejoice; let creation sing before him and exalt him with one voice.  God who laid the earth’s foundation, God who spread the heavens above, God who breathes through all creation: God is Love, eternal Love.

In the fullness of time the love of God, the word of God became flesh.  The word of God would become one with his beloved.    Angels came to Joseph, and to Mary, and whispered in their hearts, “he who laid the earth’s foundation…he will be born in love.”  You my friends, will give him shelter and comfort.  You will name him Jesus.  He will be a gift to us, the One for us, and you can be a gift to him.
Peace on the earth good will to men, from heaven’s all gracious King.  The world in solemn stillness lay to hear the angels sing.

They were on the road when Christ was born, led to the city of Bethlehem.  This one gracious ruler of all was born to a young woman, this one Love became humble, was made of bone and blood, breath and imagination.  Somehow it did happen that shepherds were summoned to his cradle, and they came close to gaze.
Who were these strangers? Why did they follow?  What gifts did they bring?  Is there a gift that is truly needed these days?  Take a moment and write it on the star in your program.   In a few moments our angel host will gather these starry gifts together.  What gift would you bring to Christ our King?
To Thee, great One in Three, the highest praises be, hence evermore; thy sovereign majesty may we in glory see, and to eternity love and adore.

What happened next is a great mystery.  Regardless of our desire to summon ancient sages to the cradle,  we can only imagine what happened next.  Joseph was from the city of David.  If you heard your cousin was in town with a newborn, what would you do?
How silently, how silently, the wondrous gift is given! So God imparts to human heats the blessings of his heaven.  No ear may hear his coming, but in this world of sin, where meek souls will receive him still the dear Christ enters in.

Scripture tells us that they found themselves in a house, in a home.  This young and scared family, Mary, Joseph and Jesus were taken in.  Given the gift of warmth, shelter, food and water.  And yet the strangeness of the Epiphany was set in motion well before that holy night in Bethlehem.  An assortment of wise ones, prophets, sages, maybe even minor kings; they discerned a star at its rising.

We know not how many wise ones, we know not their status or education or even hometowns.  Did their contemplations occur independently or together?  Did they just meet by chance on the road?  Whoever they were, wherever they came from they knew by a glimmer in the heavens and the writings of prophets that the new reign was to be born.
Sages, leave your contemplations; brighter visions beam afar; seek the great Desire of nations ye have seen his natal star; come and worship, come and worship, worship Christ the newborn King,

As logic might suggest, when seeking the new ruler, you might start at the palace.  These sages, these wise ones they went to visit Herod the King.  A man for whom history offers few kind words.  A newborn king was a threat.  He met these visitors with leading questions, and our wise friends knew something was askew.  Quickly the Magi found their way out of Herod’s court, and they continued on their way to the house where the young family stayed.
So bring him incense, gold and myrrh, come, peasant, king, to own him; the King of kings salvation brings, let loving hearts enthrone him.  This, this is Christ the King, whom shepherds guard and angels sing; haste, haste to bring him laud, the babe, the son of Mary.

Epiphany could be translated as ‘whoa’!  Have you ever been startled by finding exactly what you were looking for, but it not being anything like what you planned to find?  Being quite wise these friends they learned their lesson, listened to their intuition and having found the young Prince, they did not return to Herod’s court, instead they went home by another way.
In Christ there is no east or west, in him no south or north, but one great fellowship of love throughout the whole wide earth.

The story doesn’t end there.  The boy he takes on flesh, he becomes a child and then a teenager and then an adult.  Much of his life isn’t recorded, from which we might gather that it was rather ordinary.  Learning to tie his sandals, testing his boundaries, playing with his family and friends.  Yet beyond the ordinariness of his incarnation, beyond the giftedness of each being, this boy is an astonishing gift.  He is to be an Epiphany,  an echo of God’s first and most amazing gift, creation itself.  He who stretched the heavens is one with us, one for us, and it astonishes us still.  Whoa.


A new creation comes to life and grows, as Christ’s new body takes on flesh and blood.  The universe restored and whole will sing: Alleluia!  Amen!

At St. Paul's we offer a pageant on a Sunday close to the feast of the Epiphany. Anyone can be whatever they want to be, and the whole congregation participates by singing as the pageant crew move around the nave.