How to Have a Nick and Lucy Celebration!

1. Reserve a date in Advent.  I know that sounds like an absurd idea to some of you church leaders and volunteers.  However, it is achievable.  Currently, I have been offering Nick and Lucy as a Formation hour event between the services, and is only a feast of treats.  In the past it has been a whole brunch or a dinner with Sicilian-ish and Turkish dishes.  Different settings have different schedule demands, so choose what works best for you.  I have a silly attachment to trying to place it the weekend between the two feast days (Dec 6 for Nicholas and the 13th for Lucia), but it is often the case that the 3rd Sunday in Advent would work better. 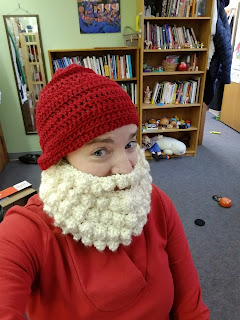 2. Ditch the Miter.  Tea cozy headdress does not become typical for WESTERN bishops until after the 12th century.  Nicholas is 4th century.  And Nicholas was a minister in what became the Eastern church.  Where such hats never really appear.  So please, no miter.  I recommend a knit hat and beard combo like the one pictured on me.  There are plenty of plans for this craft online; and folks on Etsy more than happy to sell you one.  Nick costume should be a plain shepherds crook, plain red hat, a beard, a stole or a simpler cope and either an alb or cassock and surplice.

3. Give Thanks for LED. Make a head sized candle wreath.  I make one with a styrofoam ring and ribbon and LED candles.  More crafty folks could make something more elaborate to be sure.  I limit the candles to four because they do get heavy.  Lucy wears an alb with a red sash for a belt. 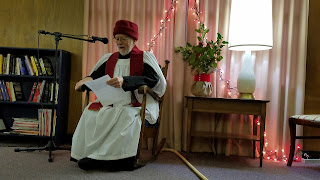 4. Act! Recruit congregants who have some desire to do a bit of acting.  I have a script for both saints, who both tell their story. These are saints from beyond time who don't know anything about any other legends connected to them.  I invite the actors to read up a bit on their saint, but to mostly follow the core of the script.  Lucia's script is rather imaginative, drawing on some of the other hagiographies of young female martyrs of that era.  Here are two excerpts from the scripts.  I would be glad to share the whole text.

My home is called Myra. It is warm and sunny, and on the edge of a very large sea.
My home is near a land called Greece and near a land called Egypt. They might call the place where I lived Turkey. Are we in Turkey or Egypt? Are we far or close? Oh my.
Well, hmm. Let me tell you about myself. I am a Christian bishop.
When I was a new bishop, the church was a very big secret. It may have been the biggest secret that ever was. It was a secret because sometimes, men and women who followed Jesus, well we could get in very great trouble for being his disciples. Yet we grew and grew and grew because we worked so hard to follow Christ, to love as he loved and serve as he served.

My mother named me Lucia, which means light.  She says we shine like the sun in the deepest darkest nights. My family, we live on the island of Sicily. Is this Sicily? It doesn’t seem like it. Hmm.
Well at home in Sicily, our family has lived here for as long as anyone can remember.
And our family is powerful and our family has plenty of everything and anything. There is nothing that we need that we cannot get.  Several years ago, I woke up early on a Sunday morning.  ....Inside I could see city leaders, a neighbor, other servants, someone whom I had seen begging near the market and many people who were comfortable like my family: and then I noticed my Aunt! ...
Then it began – the beautiful sweet singing, the stories about Jesus, who had died and then lived again, the prayers for friends and strangers, even prayers for the Emperor who hated anyone who didn’t worship him. 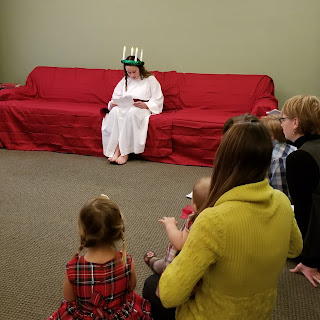 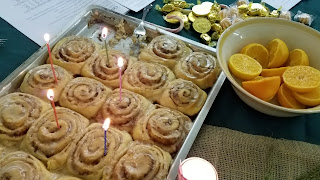 6. Fetch! Get the following items 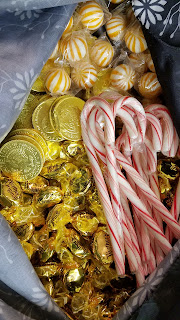 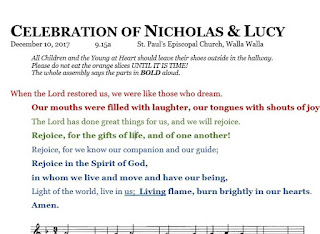 8. Pray! This is a liturgical style meal.  Older (longer) versions have scripture readings and more music.  One of my core values in liturgical work like this is that the voices are shared.  I MC the celebration, and multiple voices share the leadership voice.  These are divided up by color.

9. Serve!  Discover a good and meaningful way to serve together at the end of the party.  We make Take Home Paks.  The possiblities vary by community.  However if we are inviting folks to live into the witness of Lucy and Nick, we should help them give it a try.

So why do I like bringing these saints together?  Read more from the year before.

If you would like actual scripts and actual programs please just email me and I am glad to share.  What else do you need to know about setting this good thing up??
Posted by Jane Alice at 4:48 PM