Do Not Fear the Pavement

A Reflection in Remembrance of Oscar Romero, March 24, 2013
On warm summer nights in Berkeley, California, there used to be a small group of skateboarding friends. Long after the streets had rolled up, they would begin their game.  The goal of the game was to catch the light at the North Gate of Cal (University of California at Berkeley).  To catch it on their skateboards, to catch a light that from the direction of their travel was more often red than green; the game was to catch this light, and go sailing onto the skateboarders heaven of an auto free campus. They would begin this game five blocks uphill, and around a left hand turn and beyond 3 stop signs. They could not see where they were going.  They could not see the light.  It wouldn't matter because it could change at any time.

I didn't watch this adventure because of the game itself.  I watched because their play, their practice of the game was a thing of beauty. They were like dancers, like surfers, riding imaginary waves.  They were free within their passion for their craft. It was as if the pavement was no threat at all.  I don't know about you but I don't feel as if my life is frequently in danger.  I lead a fairly safe life.  I do not fear for my life the way Romero's parishioners did.  Romero, like so many nameless martyrs didn't seek out danger.  They sought to proclaim Good News in word and deed.  They rose to the test because their ministry was performance art.  The risks were real and apparent, but they didn't stop because of fear.  They kept going down the hill as if the pavement was made of pillows.

How do you keep going when the risks seem overwhelming?  How do we strive for justice when the final peace is blocks away, around the corner, with stop signs and red lights all along our route?  Live this faith like we mean it.  Do not fear the pavement.  Practice as an artist in love with the subject.  As the famous prayer attributed to Romero says, we plant a future we may not see. “We provide yeast that produces far beyond our capabilities.  We cannot do everything, and there is a sense of liberation in realizing that.  This enables us to do something, and to do it very well.  It may be incomplete, but it is a beginning, a step along the way, an opportunity for the Lord's grace to enter and do the rest.” 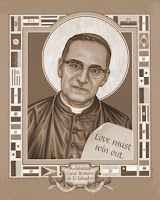 Let us set our wheels to the pavement, let us build up our desire for the kingdom as our friend Archbishop Romero did.  Let us follow in the footsteps of his witness, let us take a ride that leads through risk to a green light that we cannot even see.  Love the Lord in pursuit of freedom, and let God's grace lead us through the rest.
Posted by Jane Alice at 11:58 AM