Original Vigils and the Rainbow Easter 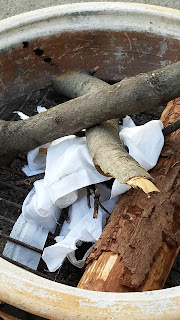 It was over four years ago now.  My first winter here in Walla Walla and the staff were discussing the Easter and Holy Week schedule when the Vigil came up.  Easter Vigil that is.  I was startled by the bellyaching: 'We put so much work in and nobody comes.  Maybe we should just encourage folks who are interested to go elsewhere.  Maybe we should cancel.'

Long before I touched down here I had been pondering the Vigil and its hits and misses.  As I explained a few years ago, it should be like Opening Day at the ballpark, and sometimes it is more like an overdone halftime show or a complete snooze.  So I took a big swing at the sudden gap in left field: I deconstructed the Vigil and offered instead an 'Original Vigil'.  It was at a home, around a fire pit.  Families told the sacred stories, we shared the parts of the liturgy, and then had an old style bread and wine and cheese and grapes and olives Eucharistic feast.  It was awesome and felt like Easter, even in the second year when it was much colder outside.

The next year, well, the short version is, there was a big staff change.  At the time we were in the Holy Week planning stages we had gone months without a settled priest, and didn't know when we would see an Interim.  One of the tasks of interim ministry (I would later learn) is to reconnect with the centers of the tradition.  I felt is was important in that time period to bring it back to the church property and into the nave.  We brought back into the vigil liturgy some of the classic pieces but strived to keep the informal and family friendly atmosphere. Sometimes we still call it 'original', sometimes we do not.  I admit that it isn't for everybody (no nosebleeds), but it felt like Easter.   All the deep meaning making symbols and actions: like fires shared and feasts celebrated, but really no trace of the sedate. 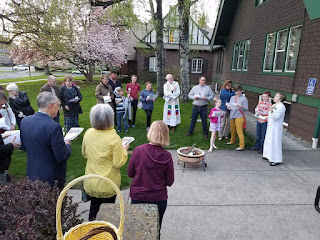 I think that part of the reason I wanted to reshape the Vigil was because done well, it teaches without saying 'now we are teaching'.  The symbols of fire and light, the dark nave, the stories that go back to the start.   I was taught to ask in each sermon, what does the congregation most need to hear?  For me, on that night, there isn't a whole lot more they needed to hear.   After having spent four seasons shaping and reshaping this liturgy in search of 'natural formation' I found myself surprisingly stumped by what to preach.  In my heart, the shape of the liturgy does that.  Yet still, there I was, slated to preach that night.  So what follows is a somewhat all over the place, but enthusiastic, homily/apologetic.

If you would like to get a look at the bulletin for this year's vigil, please contact me at St. Paul's!


All by ourselves, all on our own in the wasteland of discarded hopes and trampled dreams of Holy Week,  we might conclude that there isn’t enough of anything to undo what has been done. Our Lord and master was put to death, he was laid in a tomb.  All seems dark, all we might know is that we feel scared.  I wonder if the followers of Jesus thought to run, or if they were paralyzed.  On our best days we are brave ones, holy ones, better people doing good. On other days we give up, retreat into the ark during the storm.  We might even take what we have made and throw it in the waste bin, because it didn’t go as we had expected. 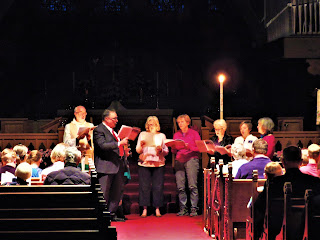 What might that first moment of creation felt like for God? What surge of delight was the big bang really like? Was it a glowing gentle tickle or like leaping from a plane? Yet, what we do know is that for all the first blush, it wasn’t long before the rejoicing was interrupted. God found something perhaps sad, perhaps unexpected.  On the other side of love was grief. Disappointment about our lazy hearts and selfishness and violence. Was it the tears of the Creator, that covered the earth in a sea of grief?  Yet then, beyond the storms, it is as if that first spark of light passed through the mist of God’s heartbreak, and from the angle of love, set a rainbow in the sky.

Again and again the story continues, with God bending down to his people sunk in terror,raising us from that miry pit.  God’s presence gives direction to exiles, brings life to futures believed dead and gone.  I could read you pages and pages of scholarly texts about what happens this night, but it probably wouldn’t do much good.  Because Easter is something that you taste and see and do.

None of our gospels tell us what actually happened in the dark of Jesus’ tomb.  We don’t read of first heartbeats, the light returning to his eyes or breath coming to his lungs. All we are told is of the result, all we hear is ‘be not afraid’.  Christ is risen from the dead, he is not here..you have the mission, Go! God’s spark of life burns up all our lostness and begins something new.  Easter is a thanksgiving, a firework, a celebration that throws a rainbow of energy on all our flatness and deadness. 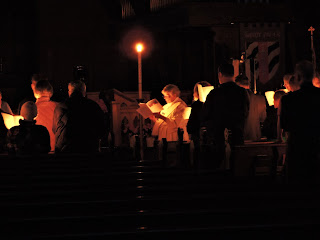 This is the Easter Vigil, and around here we celebrate it a little bit different.  A few years ago we took it out of the nave, into a home and a backyard.  We share it like we are the ancients gathered around the fire, telling our stories, sharing our grief and our joy.  We also went back to the beginning of the church, before buildings and orders and dioceses, and practiced Vigil in a home, like the first Christians did.  We stripped it back to its heart and recreated this Vigil.  I don’t know what it was like before I came, but...I love vigil, but I have also been to Vigil’s that were beautiful, but so flat and so distant and so complicated, that people skipped it, or slept right through it. Which is tough because on this night, unlike all other nights, the experience of God’s life should be like that brilliant rainbow, so  bright, so striking, that you want to follow it.

This is why we take the time to ignite the fire, burn the candles, share the voices, throw on the lights and sing the songs.  Easter is a glow that you taste and see and do.  This is why we take the time to journey through the big story of how God keeps reaching into our disasters and bringing us back to wholeness again and again and again. The angel says we are to not be afraid.  Be not afraid of all the strangeness and danger and complexity of our very real challenges. Be not afraid because Easter is a way of life that we taste, and see, and do.  Not all on our own, but together, with you and me and the ancients and the future, and with God and with Christ and with the Holy Spirit. 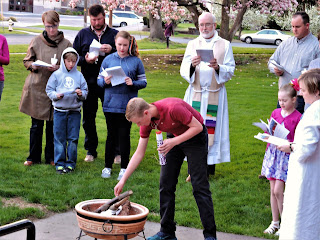 We do this on this night in this rainbow way (the bulletin is printed with different colors for different voices), where all ages claim a voice in the whole liturgy,  to tell an important part of the story that gets trampled over much too often.This is everybody's story it's for all of us to tell, it’s for all of us to share, it's for all people to find their part in: not just those of us who regularly wear white gowns. Don’t know what’s going on? Guess what, neither did the disciples. Be Not Afraid..Go anyways.  To quote singer-songwriter Ben Folds, ‘If you are paralyzed by the voice in your head, it is the standing still that should be scaring you instead.’  Easter is a practice that you can taste and see and do.  Alleluia. Amen.


And for a different perspective, check out this post by Steve W.
Thanks to Earl Blackaby and Michelle Janning for the Vigil photos.