Re-imagined Parables of Finding and Sacrifice 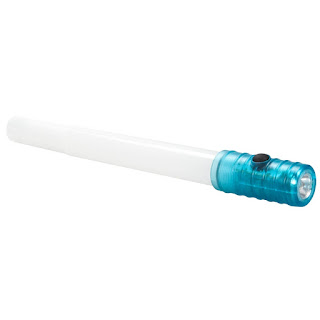 For many years of my ministry, I have given this flashlight to graduating seniors. Actually what I give is a water bottle filled with things like a thermometer and bandaids and this flashlight. Giving books that are never read, or pens that are easily lost seems like a waste. Instead, I give them tokens for the journey of what comes next. Tokens that are metaphors of faith AND items that meet practical needs - hydration, healing, light.

I like this particular flashlight for a couple of reasons. It has several ways to enlighten: direct, glow, flash. It is lightweight enough to hold between your teeth when you need your hands free, And/or you can put it on a string. The flashing option is clearly intended for emergencies, And it also has a whistle: not melodic in any way, but good for getting found in a desperate situation. In a moment of unknowing and crisis, a light like this is a precious gift.

It is easy to hear today’s parables and think of them calmly and cutely. Aw, that lost sheep got found, it was like the Poky Little Puppy - just off doing its own thing not even knowing it was “lost”. We have been misguidedly trained to approach most of the not-obviously-difficult parts of the Gospels as if they were marshmallows. However, the other time we hear these two parables of the Found Coin and the Found Sheep is in Lent, and our Psalm is Lenten, and the lamentation of Jeremiah is one to be heard during Holy Week. Jesus is headed towards Jerusalem, the people he is speaking to know that harsh winds are blowing. The powerful are fearful and lashing out, The poor are getting poorer and ready to rebel.

All these things have happened before... so let's reimagine the parables a bit. Let us say that the shepherd is instead a delivery driver. She has to deliver so many packages in just so much time, Or she gets docked, and she doesn’t get promoted. The powers that be have set up her digital tracker so that it looks like a light-hearted video game, but it feels like the Hunger Games. And a package gets lost. The package doesn’t care that it is lost. It didn’t lose itself. Taking the time to find the lost package is a sacrifice of time and treasure. However, for the person who was expecting that precious package, The delivery driver's determination is everything.

As for the Found Coin, imagine instead a struggling young man. He works mostly on a

cash basis and doesn’t have a checking account, like nearly ⅓ of Americans. He keeps much of his not cash money on refillable debit gift cards. Most of his ‘liquid assets’ are right now in 10 $100 cards. And as happens sometimes to the most organized of us - one of those cards goes missing. The card didn’t lose itself, It wasn’t wasted on dames and horses. It is simply missing. So he turns on all the lights, which they really cannot afford Because the electric rate went up again. He disturbs his roommates, who have long shifts at a warehouse, and they need their sleep. Yet he searches and searches - until he finds that one gift card. He is so thrilled about finding it he posts on Twitter and wakes his roommates and invites all his friends to a party to celebrate. Which maybe costs about as much as was held on that card in the first place. And this according to Jesus, is good news. It may not be reasonable, but this is a parable. It could be a wild and crazy other-kingdom kind of what ‘God is like’ metaphor where practicality doesn’t matter nearly as much as truth and love. It makes its point by the unreasonableness. Our owning up to our honest to goodness lostness is what invites us to the grace of God. And the way to grace isn’t found through our perfections, but through our imperfections and the cross and the empty tomb.

So where are you today? Are you the sheep minding her own business? Are you the shepherd in frantic search? Could you be the grumbling scribe? Or are you a tax collector leaning into the word of love you have been denied?

There is a long tradition that tries to make every parable a ‘God is like’ one of these human characters' lessons. Taken that way, these parables do highlight interesting adjectives when it comes to God, ones we certainly need: persistence and risk-taking and party-throwing. However, I am not so sure that this is certainly one of those - ‘God is like’ parables - at least not in the most obvious way. If we are the sheep or the coin - why are we lost to God by no action of our own? That doesn’t hold water in our tradition at all. The coin didn’t sin, it didn’t lose itself - and human sin - both our own and those of our communities - have always been the measure of failure and needing to find ourselves again in God’s arms.

If you take the view that this is a parable of grace, and therefore a parable of death and resurrection, Then you might have to try on a different arrangement of the metaphors. Sheep are the backbone of the ancient Jewish economy and well being. And singled out sheep usually a sacrifice. If you don’t have sheep, then you might have coins to exchange for a dove, and so coins are in their own way Also a token of sacrifice. Repentance is the center of this episode - and it is the human who acts in ways that suggest repentance, all that persistent demanding action to restore what has fallen away. Maybe God is the sheep or the coin that is found and returned to human lives, maybe sheep and coin are images of Jesus himself: precious, lost, sacrifice.

The beautiful thing about parables is that sometimes many interpretations are true. Finding and re-finding God’s awesome presence can be both frightening and enlightening. Let the celebrations of these parables shine a light on our emptiness, let that be filled with the reality that God’s grace is always present, whether or not we have a grasp on God at this moment, and even when we think we are lost from God.
It is as if Jesus is saying all the things we pursue to try to fill our God-shaped holes, “Give it up already, God is here, ready to throw a party for you." 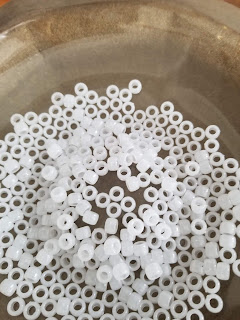 I have gathered for you little bits of precious light: glow-in-the-dark beads. Keep them somewhere you choose, somewhere with some light, But perhaps somewhere that you don’t always notice. When you see them glow, remember found sheep and found coins. And that it is God whose precious light will fill the God-shaped holes in our anxiousness. The gift of grace, the token of trust, has been already given in the life, death, and resurrection of Jesus the Christ. Look around, look deep, shine a little light. Persist, adapt, stick together, collaborate, celebrate. This is the way of love, the way of Jesus, the way of God’s grace.