Too Cool to Be Joseph? 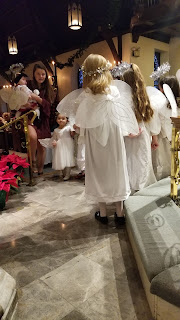 It was a beautiful fall day in Albuquerque. still warm enough to sit outside at lunchtime. my friend Molly and I had gotten together for our pretty much weekly lunch meetup. I was already well into Christmas planning mode - and I was complaining a bit. Mary was cast, Jesus was cast, I had talked one teen into being a fire angel in the Christmas Pageant. But finding a Joseph was like finding someone to scrub toilets. As it happens Molly’s son George was with us that day. I don't have any idea why he wasn't in school because he certainly wasn't sick. It is worth mentioning that George had volunteered to be Joseph twice in recent years. So I asked him why do you think other boys don't want to be Joseph in the pageant?

He replied quickly: Because they didn't want to act like a caring parent, And they probably thought it was weird and icky to have to pretend that they were in love with Mary. They think they're too cool for any of that.' After a bite he continued, 'Which is dumb,  cause Joseph Is awesome. He's all right with not being the most important person. He was a good dad and had a hard task and the whole scary angel in a dream thing - Yeah he did what he was asked and he didn't complain. Joseph is awesome.'

Our Gospel lesson today is full of weird and discomfort. We have a grown-up story that's only barely edited in translation. A grown up story that we annually invite young people to pantomime. It's also weird and uncomfortable because the reason for turning the moment of rescue comes from the appearance of an angel in a dream. The world in which Jesus was born into was one that expected the extraordinary other to be interfering in our lives connecting to our brains healing our bodies. There's nothing shocking to the ancient hearer about angels and directed dreams. But us today in our rational conventional norms? These things still happen, but in my circle, they are shared only with trusted friends And even then in hushed voices.

It may surprise you but we don't have a well-developed official angelology, certainly not the Episcopal Church or most Protestant churches. Most of the common depictions are not what we read of in the Bible, many common beliefs are not and have never been Christian teaching - bells and wings for example. Angels in the Bible are carriers of messages so much so that they are the message. The oldest mentions of angels in the Hebrew Scriptures have almost no description at all We are left with an impression Of strange human like visitors. By the era of the last written texts, the description of angels in Ancient Judaism sounded more like Hindu gods with lots of terrifying wings and eyes, and they act rather like greek gods, and they have names and pronouns that are always masculine. No precious moments there.

I trust that God is the creator of all things that God has made a universe that has little bits I can comprehend and a whole lot more that I'll never be able to manage. For me, Angels are mysterious embodiments of God's communications Between what I can understand And the marvelous mysterious everything else. Today an angel appears in a dream, and to me, dreams are in a similar zone. Whatever happens to some people in that stage of dreaming sleep it can be a powerful space of revelation, and an encounter with the glorious and awe-some things that are going on all around us whether we acknowledge it or not. Joseph's story of The experience of an angelic message in a dream connects this scripture to the primordial epics of Jacob and Joseph.

However, much more important to our dwelling in the sacred story is his example. Joseph makes the courageous choice to step into a strange borderland of the revolutionary thing God is doing in the birth of Jesus. Joseph had every social and legal opportunity to wash his hands and walk away. But he didn't. From the point of view of established Christian doctrine it's easy to say of course he stuck around - because this is the birth of God. But in the moment when so much is still not completely clear to him or to Mary or to anyone else… Savior, messiah, liberator - sure these revelations are proclaimed - but the truth of their promise In Jesus the Christ - no one had the full picture for decades.

So let's be honest Joseph’s choice to follow the dream, to trust the angel, to stand by Mary absolutely led to a lifetime in which he was regularly besieged by murmurs both openly and behind his back. His reputation his standing had to have been diminished - because Joseph chose this strange public duty. Christmas is almost here - but lets take a minute to clear away the mess of saccharine trappings for a minute - What would you do in Josephs’s situation? Or if you were his friend? If it is far from the best ways to live, can you bring that deficit to prayer this week?

Bravery isn't always about running into the fire, sometimes it is the measure of our candid embrace with life as it comes to us. Bravery most often bears the everyday tasks of honesty and fidelity and humility. Joseph’s courage is fullfilling his duty and doing so with a mysterious precious promise to hold at the same time. Joseph is a background player, is barely a supporting role. we see him here then as a refugee heading to Egypt, then he's with Jesus and the whole family when Jesus is about 12, and then nothing is said of Joseph again. There are two millenia of traditions and guesses that have grown up around him, but the biblical texts almost seem to forget about Joseph. What my young friend George didn't exactly say but his young words and emotion did say Is that Joseph is an example of allowing oneself to be faithful to an unexpected duty of welcoming the stranger and to do so wholeheartedly, with no reward and almost invisibly. Joseph is awesome. Let’s be awesome - like Joseph was for Christ our Lord. Humility. Service. Fidelity. Compassion. A prime example of what we now call Christian discipleship. May we be just as brave today, tomorrow and for always.
4th Advent (RCL A)
Christ Church, Ridley Park, Pennsylvania
December 22, 2019
Posted by Jane Alice at 1:05 PM