It was January and we were traveling to and fro for a wedding. Two friends from seminary were marrying each other in Michigan. I was traveling by plane and car with Dave. Dave is the kind of person who always wants to drive. However, he had never seen snow before, and even though the sky never offered more than intense flurries,  I drove! After the wedding events were done, we gave a ride back to the airport to two other guests who were not seminarians or theologians or future ministers.

We arrived at the airport early enough for the first flight of our carload, And then there were three of us: Dave, George and I, sitting in an airport bar, for a few hours. George seems to have decided that this was his moment. He had two smart articulate theological types all to himself and he was going to ask every deep question he ever had. It was January in Detroit, and there was a hockey game on all the tv’s in the bar. And while the game was in action, most minds were locked on those screens. However, when the commercials rolled, something else happened. Most heads in that bar would turn to the three of us and watch and listen. It wasn’t a fancy sacred moment in the way such things are usually dramatized. The lights were bright and the food was lousy and the ambient noise was loud. Yet it was a wonder.


Sometimes I feel like nobody in the world is really all that interested in God and justice and hope I feel like no one cares about the kind of holy do-gooder life of service and philosophical things that are my calling. The wonder for me was the clear experience that people are hungry for transcendence and deep connection and soul flourishing, even if they have never crossed the threshold of a church or synagogue to find it.

If you think about the population of the Galilee area at the time of Jesus, if you consider how incredible it is that such a mass of humanity showed up at one time showed up without a paper invite or a holiday tradition or social media blast this wonder of loaves and fishes becomes even more amazing. It is the a wonder that gets repeated in all four gospels, sometimes more than once. And that kind of repetition leads me to trust That something outrageously grace-ful something transformative happened around the teaching and presence of Jesus with limited loaves and just a few fish.

And while I believe that something, something happened, I also believe that the crafty narrator of the gospel of John, the holy sage who shares this wonder today, whoever it was, this person was not counting human beings. They were too busy to be doing that! That number, it is just under a capacity crowd at a Trenton Thunder ball game. It is a large enough gathering to hint at an older sacred story. One of the primordial stories of ancient Jewish self-understanding: the Exodus. Think about it for a minute you have this wonderous meal occasion and thousands of people and then the next thing is that the missionary of God walks the through or over the uncontrollable danger of water.

The episodes of the Gospel today are not about testing the limits of rational belief, but about focused unexpected real life liberation. It's about the promise of God to hear our cries, the promise to deliver, to be with us and for us, not by raining down food or magically solidifying water, but by partnering with fellow missionaries of Go, apostles and disciples and wonderers. Folks who know or merely hope that this fracturedness and scarcity is not all there is.

The inarguable facet of this wonder is that the fish and the bread were there. Somebody had fish and bread. They had assets, treasures, blessings. So what does Grace Church already have, what asset, what loaf, what fish do have you already have in your pockets? I didn’t go into the airport that day intending to be a witness, to offer a treasure to anyone, much less to many strangers. But I have to believe, that we did.

We know that there is dire need in this community. Need for connection and hope and calories and educational support. I suspect that there are people nearby Who believe that everyone despises them and Believe that there is no possibility of anything else. They have not known much good news. How does Jesus’ teaching ministry that is also a feeding ministry how can it show us the way To share the real deep true love of God? 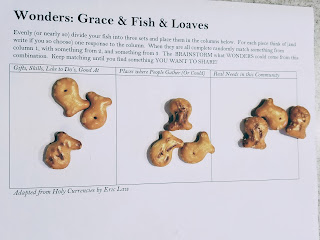 Today when you leave I invite you to take a cup of pretzel goldfish from the bowl in the baptismal font. Take that cup and the small sheet of stacked beside the font with you on your way home. When you get wherever you are going divide that treasure of loaf fishes Into three even groups. With the first group brainstorm some passions, skills, and knowledge that you or folks in this community have. Any of them, whether or not you think they can be used for the mission of God, as long as they are not actually evil skills or passions. With the second group list places where people gather or could gather in the greater Pemberton area. Don’t let practical concerns hold you back, this is a wonder, not a feasibility study. So no self-editing and no reality checks!

With the third group name some of the dire needs of this place and time. Calories, connection, love, learning, and so on. Then randomly take one item from each column and imagine How the three could become a sacred story become a wonder in Jesus’ way. You don’t have to do it, but I dare you to try. It may not even be your thing to do, Sometimes we are vision casters for each other. Think like an outrageous artist in love with the crowd. It doesn’t have to be realistic or reasonable. Who would it hurt to try something that is good news? If it doesn’t work the way we want, but folks still get shelter or connection or love, then alleluia!

Whoever offered up the loaves and fish didn’t know what to expect. They just did it. They were givers and receivers of mystery. People who perhaps had an inkling but no real comprehension of the wonder, the real big deep tasty love that God has for all the world. These divine daydreams and actions and wonders cannot wait until the new sheepdog comes. Nor can we expect that the needs will come to our door and express themselves clearly and concretely. My friends and I at the airport didn’t expect to be a gift. Nor did we sit in our seminary classrooms or dorm rooms and have deep thoughts together and hope they got out. It was an accidental adventure in this mission.

We had smarts and the ability and willingness to share it.  We were at a place where people gather, And the sea of humanity that we encountered in that borderzone has a dire need for the sacred that we don’t even know how to express. That afternoon wasn’t a performance or a show or a contrived kind of a desperate thing. It was authentic. Truly full of real questions and real community. Not thousands exactly but three people at the table in a crowd. Full of something special that broke through some degree of worldly numbness and lostness.

So dream brainstorm try wonder hope act. Let go of value judgments and trust the soul and the Spirit as much as the disciples in this loaves and fishes moment. It is outlandish and silly and crazy to go find the few fish and few loaves and get them into the hands of love and dare to trust that God can do good things outlandishly abundant things with so little. It only needs hands of disciples to follow, to try, to daydream of being the kind of companion for the lost the lonely the least and the last that Jesus is for you. It's not loud or showy it's simply coming up beside people in need, and using our blessings to be the way of Love, to be unexpected moments of transformational grace. I wonder, what wonders can you live?